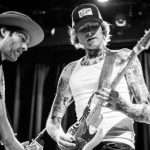 Lowell Thompson is a musician who splits his time between Burlington, VT and Austin, TX. Seven Days calls him “A young tunesmith transformed into a true artistic force.” Big Heavy World says Thompson is “The most genuine sort of musician out there.” Rolling Stone magazine calls his music “Inspired Alt-Country.” Any way you cut it, Thompson’s work speaks for itself and has been vetted by his fellow musicians—hand-picked to share stages with the likes of Graham Parker, Justin Townes Earle, and Dawes.