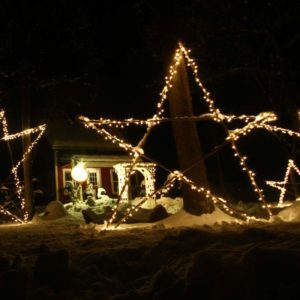 One of the original star displays was in front of Reign Vermont in Waitsfield Village.

THE ORIGIN OF THE MAD RIVER VALLEY’S STARS

In 2013 the Mad River Valley was ramping up the annual Festival of Lights celebration for the holiday season. Local businesses were encouraged to decorate their offices, buildings, exterior conifers, etc. with their best displays that would not only be officially lit up on the same night- but would also be subject to a judging panel who deemed some lucky winners the tallest, brightest and most brilliant.

A valley native and small business owner Dr. Corin Bauer, of Balanced Life Chiropractic rented a space in the Historic Waitsfield Village and wanted to contribute to the decorations being done by other business owners in the building and thus, the first star was made for the side of the Fuller House.

As a child, growing up in Fayston every year, Bauers mother would hang a star lit with bulbs in the top window of their home, for those driving by to see. In the 1980’s without technology so ever present- you would bundle up & get in the car with your family listening to christmas music, and drive around after dark during the holidays to see your communities display of christmas cheer. The star, hanging in the top window of her home, was the true sign of the holidays.

The following year, in 2014 after some renovations to town roads and infrastructure there was even more initiative for the holidays to make the Festival of Lights bigger and brighter and to have an exponential number of Valley Businesses participating.

Barbara Gulissano, a local resident and family business owner of The Green Cup on Bridge Street as well as Sheri DeFlavio of 40 Bridge contacted other businesses in the immediate area to make Bridge Street the focus of town that year. Gulissano contacted Bauer about joining them in lighting up the downtown area, and Bauer along with her landlord and other local business owner, Bridget Lamell of Reign Vermont hopped on board.

Bauers backyard abuts a large sugarwood where her neighbors had recently cleared a plethora of small saplings for some new sap lines. Those were the perfect material, and size and best of all they could be made into stars of all sizes. Bauer taught her neighbors Bridget Lamell and her partner, Chris Pearson, how to assemble the stars and Bauer shared her vision to make stars of multiple sizes to put all around the Fuller House where she rented a space, and surrounding area where Lamell’s business adjoins. They loved the idea and together, built stars of multiple sizes to adorn their businesses. 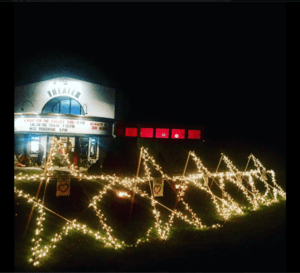 The 5 Stars became ubiquitous after the tragic accident involving the 5 local teens.

Gulissano, DeFlavio, Bauer and Lamell met and came up with an idea to split up portions of town and go ask local businesses to partake in the mass star making- if they wanted to buy a pre made star from us or if they wanted to even just make some of their own to display when the time came.

In November of 2014, Gulissano organized a meeting in the parking lot adjacent to these Bridge Street businesses and assemble stars with Bauers guidance. Valley residents from near and far drove down to happily drop off branches from their yards to be made into stars big and small. Sugarbush employees came down by the carload to make an abundance of smaller stars to hang throughout the village. It was truly a community event.

That year, the Valley was magical. Stars of all shapes and sizes popped up from the northern most to southern tip of town. Lamell won the first prize in the Festival of Lights for the oversized stars that light up her cozy little nook and building. The cozy, country scene that the businesses on Bridge Street created was truly out of a magazine, and the Valley was aglow.

In 2015, the stars were a hit and growing in numbers across the state and everyone was hopping on board. WCAX local news interviewed Gulissano, DeFlavio and Bauer about the lights in the Valley and the origin of the stars in a clip entitled “Stars shine bright in the Mad River Valley”

Stars could be seen hanging on trees, on homes, on barns, and in scenarios where ones creativity truly shines through. Bauer recalls driving to her family’s house in Roxbury for Christmas that year and tearing up at the sight of stars near and far, shining such light and love and community togetherness during the holiday season. Something we in the Mad River Valley are blessed to experience during all times of the year, not just the holiday months. How special that people were putting their own take on them, that they were making them of different shapes and sizes & with lights of all colors. The originals were made of irregular saplings… and some people made them out of milled lumber for the truly perfect star. What a glorious expression of individualism, yet community togetherness all in one. 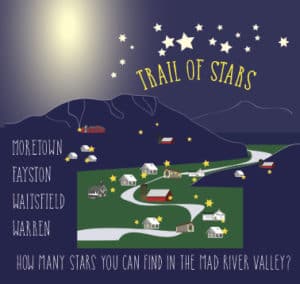 In the coming years, stars grew in numbers and showed up here and there lighting up what seemed to be every corner of the state. They were everywhere, they were the symbol of community, they were a symbol of togetherness. In October of 2016 the stars took on a new meaning when 5 local teens were killed in a wrong way accident on the highway. Local teens, who were known and loved in the community and were the children of Bauers childhood friends & neighbors. Teens who were aspiring students & athletes and shining lights in a very small and tightly knit community.

Bauer recalls stars were lit within days of the accident. People were lighting five candles nightly, one for each of these teens taken too soon. The star has five points, and there were five kids. People made five of the exact sized stars and hung them up adorning their homes. People lit their christmas stars up in October, in a symbol of community and togetherness while we mourned with our friends and neighbors over the loss of their bright young stars, their precious children.

It doesn’t have to be winter any more for these stars to be lit in the Valley. While it began as a childhood family tradition for Bauer, it evolved to a fun holiday community event that then further evolved to a deep symbol of support, love and solidarity to friends and neighbors who so needlessly lost their precious children. 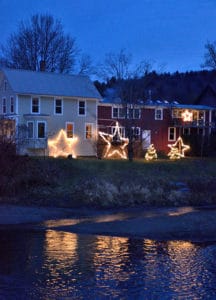 Creativity has been the hallmark of the MRV star phenomenon.

Today stars are sold pre made or in kits by the Chamber, as a fundraiser for foundations set up to honor the five teens.

Bauer is continuously in awe of how far her simple idea has come, and how it has brought together her community in a way that was never intended, but is of no surprise. There is no sense of community like the Mad River Valley, and the people that live here and grow up here make the fabric of this loving quilt, and in good times or in bad- during the holidays or just to light up a night in July, they sure know how to shed some support, light and love on those whom share this magical place as their home.