Skiers & Snowboarders unite?
Mad River Glen Co-op owners met in an emergency session last night to finalize a deal that may surprise Vermont and the ski industry in general.

rea. “We have been toying with this idea for years. What with the similar terrain and conditions, not to mention the geographically proximity, all it took was some smart saving, a great ski season and bold thinking to make it happen.”

Eric Friedman, Mad River Glen’s longtime Director of Marketing, seemed excited at the possibilities: “The cool side benefit of this deal is that we finally get to offer snowboarders a place for to play without disturbing the pristine beauty that is Mad River Glen. We’ll open up trails for skiers and riders without upsetting either of them.”

Eric went on to describe the Co-op would be 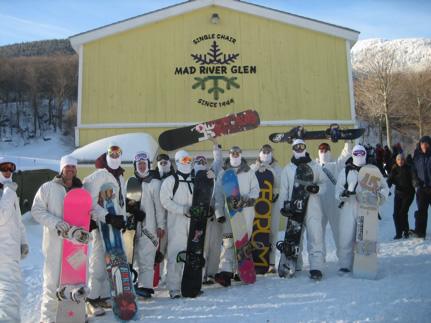 asking shareholders to reinvest approximately $750 each to help finance a new single chair cross- mountain lift named Dromedary. “In keeping with our friendly nature, we plan on building a high-speed single chair that will connect the two mountains through Mount Ellen’s Brambles Woods and over to MRG’s Lower Antelope. You’ll be able to wait in line at Mad River Glen ‘s Single Chair bumping into old friends and then ride up quietly alone to the peak, ski down part way and then ride another, slightly faster chair to the top of Inverness at Mount Ellen.”

He continued, “and yes, before you ask, Mount Ellen will be Snowboard-only!”

Asked how the new connector might work with the conflicting mountain-specific equipment rules, he responded, “there are still some operational details that need to be worked out.” 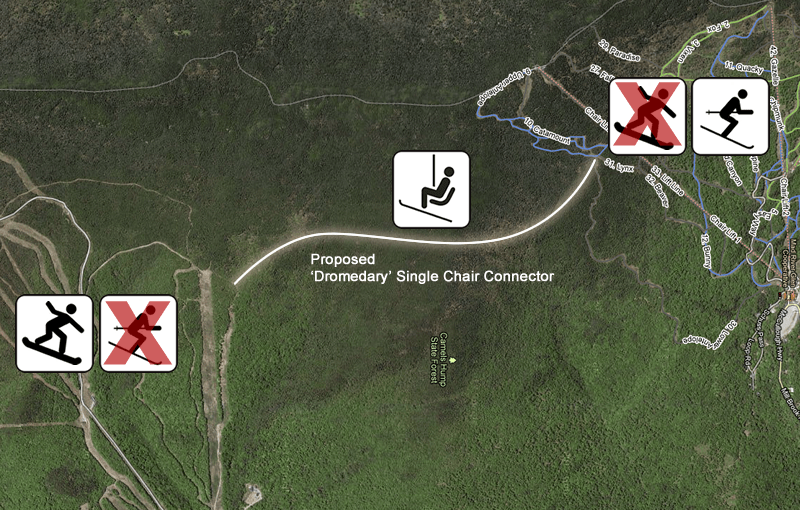 Mad River Glen officials refused to comment on Act 250 permit details or what plans they had to handle the environmental impacts on the fisher cat habitat in the Camels Hump State Forest.

When asked for comments, Susan Klein, the Mad River Valley Chamber of Commerce’s Executive Director responded via email with a single sentence: “For the time being, we are going to be excited for the upcoming possibilities this merger brings to the Mad River Valley.”