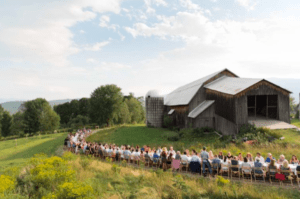 Quirky is defined as “characterized by peculiar or unexpected traits” and the Mad River Valley certainly fits the bill in any number of ways. Without question our renowned dining scene is certainly is one of them. Inspired by our natural beauty and abundant local makers, our culinary masters offer up a whole slew of unexpected experiences, many of which leave diners saying, “Only in the Mad River Valley”!

Whether it be unique, local offerings, beautiful locales, unsurpassed service, a funky presentation or any combination of the above, the Mad River Valley won’t disappoint. Here are some of our favorites; 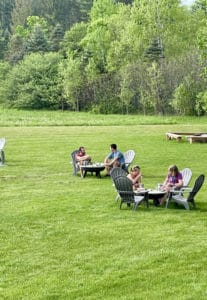 Backyard Fun at the 1824 House
Backyards are made for hanging out and relaxing and the 1824 House Inn and Barn might just have one of the best backyard in the Mad River Valley.  Sean and Farrell, the proprietors, have opened it up to the public on weekend afternoons all summer long offering up sandwiches, appetizers and an amazing array of craft beers, wine and specialty cocktails. You can play some yard games, enjoy some beverages or a whole meal out on the lawn or in their renovated, classic Vermont barn, Heck, you can even do “to-go” and head over to their  own private Mad River swim-hole.  Some of their culinary highlights include their Bubb Bi, A kosher take on the Vietnamese classic Banh Mi, the delicious Mountain Goat, a vegetarian sandwich everyone will love or the 1824 House signature sandwich, The Burgh, yup they stack fries on the sandwich just like any self respecting Steeler fan would! 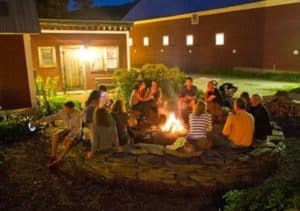 The OG of Quirky Dining
Quirky dining in the MRV is practically synonymous with American Flatbread. What began back in the 1980’s has become a culinary icon at their picturesque Lareau Farm home.  Flatbread is open for take-out, but invites guests to dine on the bucolic grounds of the farm.  Their front room is also open, allowing guests to order beer and wine. Be sure not to miss this “Only in the MRV” experience. 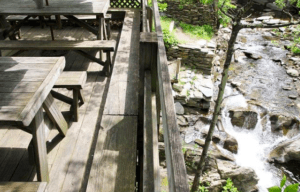 Warren Store Pop-Up Dinners at the Pitcher Inn
Looking for a midweek option that will knock your socks off? Every Monday and Tuesday The “nearly World-Famous” Warren Store hosts pop-up dinners at the Pitcher Inn.  It’s a prix fixe scenario that gets you 2 appetizers, a small plate and dessert. Menu highlights include; blue cheese stuffed bacon wrapped dates, smoked brie sliders, chiller herb shrimp, Burrata crostini with arugula and rosemary pesto and a special chef’s choice sweet ending. The meals are served at Tracks, the magnificent indoor/outdoor pub at the Pitcher Inn, a Relais & Chateaux property that has to be seen to believe. The bar is open so you can pair the perfect beverage with your meal. Midweek has never tasted so good! 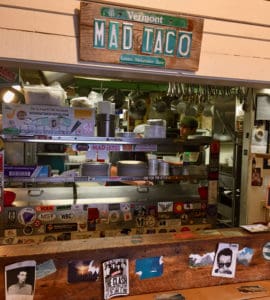 Village Square Foodcourt
If a few years back you would have told any MRV local that the Village Square (AKA  the Mehuron’s shopping center) would become one of the Valley’s culinary hotbeds you would have been written off as delusional. But times sure are a changin’ as a new wave of entrepreneurial investment in the shopping center has turned it into a veritable “Rural Food Court”! “It’s probably the tastiest parking lot in Vermont,” says Stoke Ramen chef-owner Colby Miller.  There are picnic tables on the green and in between Pizza Soul and Mehuron’s. Village Square. Diners can also take a stroll on the Mad River Path for a picnic or work off some of the calories

The Mad Taco first opened up in Village Square back in 2010 and it quickly became one of the most beloved eateries in town. “The Taco” team raises and grows much of the their ingredients and their staggering array of hot sauces are all homemade and thankfully, ranked from 1 to 10 on the Mad Taco hotness scale. 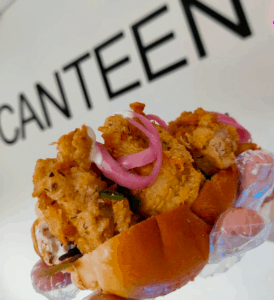 In the spring of 2016 Charlie Menard founded the Canteen Creemee Company serving up the highest-end snack bar food and the most decadent creemees in all of Vermont. Since inception “The CCC” has earned high praise in the press and among their ardent fans. Heck they even ranked as one of the top 10 iconic ice cream shops in all of New England by the Boston Globe.

Things really heated up in 2019 when Stoke Ramen opened to critical acclaim. Colby and Mimi, the owners are experienced restauranteurs who decided to strike out on their own and we’re glad they did as it’s  an exciting new addition to the valley’s culinary repertoire. 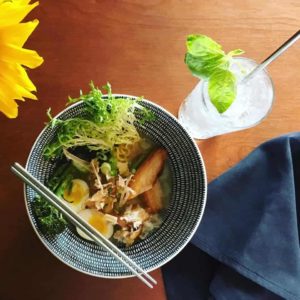 After a 10 year run up in Sugarbush Village, Pizza Soul moved down to Village Square to round out the offerings of the evolving “Rural Food Court”.  Jason Lerner and his team serve up classic, New York-style pizza, stromboli and calzones that remind our NYC area transplants of their former home.

Mehuron’s Supermarket, the Village Square’s long-time anchor has gotten into the food trend  in their own way with the recent  revamping of their deli.  Chef Patrick and his crew create a scrumptious  hot bar, fresh-made sandwiches and grab-and-go options . Mehuron’s investment in their deli was the perfect  addition to the Village Square’s food court offerings and while you’re there you can do a bit of grocery shopping too.

So when it’s time to eat everyone can get what they want; tasty tacos,  pizza, ramen, fried chicken, burgers, creative sandwiches, a healthy salad or an ever-changing variety of daily specials and, of course, a famous Vermont creemee for dessert! Come on down to the place where it is hip to be square, Village Square that is! 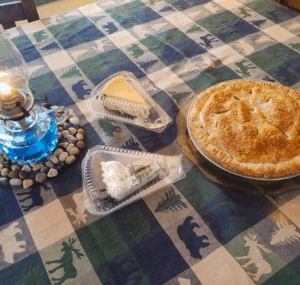 The Pie Guys
The Swanson’s Inn, owners, Rick and Tim had a novel idea when they purchased the inn, Sunday pie along with tea or fresh brewed coffee. Some local didn’t quite get it initially, but  it quickly became “a thing” here in the MRV. In the summer it’s a place to visit with family and friends in their beautiful gardens or inside the quaint inn. The pies became so popular in fact that they really started to “expand the pie shell” by offering  both sweet and savory pies on order. Now pies are available Tuesday through Sunday, remember that orders must be placed one day in advance. Heck, they even do home deliveries! 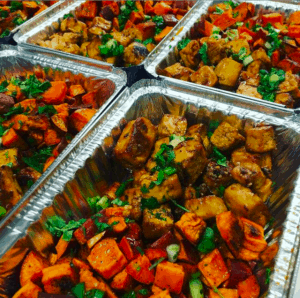 Thursdays and Fridays Kitchen Dinners at the East Warren Community Market are another unique dining experience in the MRV. Every Thursday and Friday night they have special dinners to go that are perfect for a picnic or to bring home. Each dinner serves four people and is ready for pickup by 3pm. Some of the recent selections were Gochujang Barbecue Misty Knoll Drumsticks with Peanut Noodles and BBQ Pork and Market Mac N’ Cheese. The offerings are delectable and are avaialble without pre-ordering. Get the scoop on the upcoming menu each by signing up for their Newsletter.   There are also plenty of pre-made sandwiches, sides and salads to choose from and it’s also a great place to pick up lots of local foods, beverages and kitchen staples too. 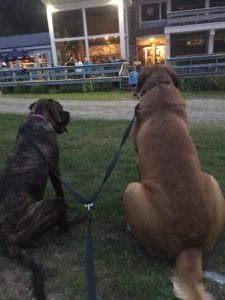 Ski Areas Offer Unique Dining Too
Both Mad River Glen and Sugarbush have gotten in on the fun and are offering some unique dining options of their own. General Stark’s Pub at Mad River Glen is always ranked among the world’s top ski area watering holes and their food has always been a big hit too. But the summer is when it really shines. Where else can you go on a spectacular hike up to the summit and return to the base to partake in a cold beverage, an awesome meal and that famous Mad River Glen conviviality? The large outdoor deck offers gorgeous views and there is plenty of room on the lawn and along the brook for kids to run around and explore. Heck, they even have a ping pong table inside for the inclement days. Oh, and the dining selections are “off the hook”! The beer battered fish and chips are the best you’ll find anywhere this side of the pond. The General Stark Salad, Prime Rib Sammy and burgers are all long-time favorites. And don’t forget the fried green beans and the decadent desserts! New for this summer, Stark’s Pub is offering a special brunch menu every Sunday from 10am to 2 pm. 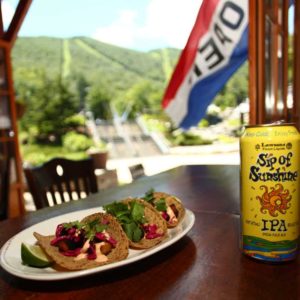 Sugarbush’s beautiful central plaza at Lincoln Peak is the the gathering place up on the mountain. There you can enjoy a great meal at Rumble’s Bistro and Bar. Dine in in the soaring dining room or enjoy the views and fresh air  out on the patio. On the menu you’ll find American cuisine with lots of  meats and cheeses from our local farms. Selection include salads, sandwiches, burgers, steak, chicken and seafood, with vegan and gluten-free options too.

Looking fro lunch with a view? Hogan’s Pub at the Sugarbush Golf Club is just the ticket. If you’re looking for something more casual check out The Lunch Box located at the Gate House Plaza. There you’ll find breakfast, lunch and beverage selections including authentic Philly Cheesesteaks, other sandwiches, soups, and breakfast options.

These are just a few suggestions, be sure to check out all of the culinary options the Mad River Valley restauranteurs have in store for you.