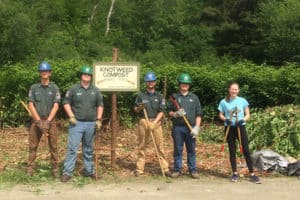 Japanese knotweed (Polygonum cuspidatum) is usually found in wet habitats, along river and stream banks, and in disturbed areas such as roadsides and old fields. In Vermont, knotweed covers miles of shoreline on every major river in the state.

Knotweed is a large herbaceous plant with smooth, hollow, and jointed stems making it look like bamboo. Stems are green and mottled during the growing season and turn a dark brown/red in the winter. It has broad, oval, dark-green leaves that are pointed at the tip. It also has small greenish-white flowers during the summer that trail down the stems that are followed by small, winged fruits later in the season. New growth looks like red asparagus stalks.

Although challenging, knotweed populations can be brought under control through a multifaceted approach. Generally, the most effective treatment is a combination of both mechanical and chemical treatment by cutting and herbicide application respectively. However, frequent cutting, three to four times, throughout the growing season for multiple years may be enough. Cutting can be done using loppers, machetes, scythes, and even mowers. Herbicide can be applied to cut stems earlier in the growing season or sprayed on leaves later in the season. Make sure the herbicide is appropriate for use near water or contact a professional for chemical treatment.

Knotweed can be prevented from spreading by ensuring that entire root systems are removed when pulling small plants. All plant parts must also be bagged so they cannot become re-established, in a compost pile for example. The most important preventive method is to plant native vegetation along river and stream banks and in disturbed areas and, if knotweed is detected, responding immediately before it spreads.

Japanese knotweed is on the Vermont Noxious Weed Quarantine list, and it is illegal to purchase, plant, or transport this plant in the state.

Town of Waitsfield Invasive Plant Management Plan
The Town of Waitsfield owns properties along the Mad River that are used for recreation but also have great ecological values. This plan aims to address invasive plant management on two properties, the Austin and Tardy parcels.

Town of Warren Knot Weed Project
Project is sponsored by the Warren Conservation Commission. Project Goal is the map all knotweed locations in the Town of Warren and track the progress of the eradication program. Project will collect data on each site and the work done to eradicate knotweed from that site.

Check out Native Plant Sources for places to purchase plants native to Vermont.

For more on Japanese knotweed and its management options

For more on general herbicide application. Contact the Vermont Department of Agriculture at (802) 828-2431 for a list of contractors