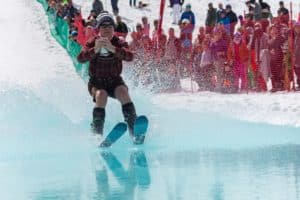 Win Smith is well known for working to make the MRV a better place. He is also well-know for being one heck of a pond skimmer too!

The Mad River Valley Chamber of Commerce announced the creation and recipient of the inaugural Win Smith Be Better Award at its 2020 Annual Meeting held on September 9.

The award was conceived after Sugarbush President, Win Smith recently announced his retirement.  Win has been an incredibly generous and outspoken cheerleader for the Mad River Valley. The Mad River Valley Chamber of Commerce wanted to recognize and honor his contribution to our community.

“I have always been impressed by the way Win has continually worked to make the MRV a better place. What stands out most over the years was his response to Hurricane Irene and it’s aftermath and how he diligently rallied our community and was so incredibly generous in so many ways.” said chamber Executive Director, Eric Friedman, adding: “More recently, when the pandemic crisis began I was in communication with Win often. He said the exact same thing every time we spoke. ‘What can I do to help?’And Win meant it. So many times he came through to help make the MRV a better place. I came to understand that he really took Sugarbush’s motto, ‘Be Better Here’, very literally and seriously.” 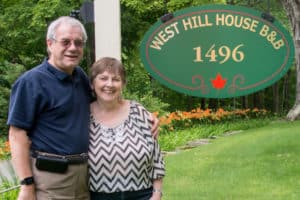 Peter and his wife, Susan are the longtime owners of the West Hill House B&B.

The inaugural award was presented to Peter MacLaren, co-owner of the West Hill House B&B  Peter has done yeoman work for the chamber and for the MRV community for many years. He has been an active member of the chamber board as well as being board chair for the past two and a half years while also serving on the steering committee of the MRV Planning District. Peter was named the 2019 Vermont Chamber Borden E. Avery Innkeeper of the Year. Shortly after they arrived in the Valley he and his wife Susan took the initiative with help from a few others to refurbish the long neglected travel kiosk at an old, derelict gas station in Warren and turn it into a welcoming travel information center on the MRV’s southern gateway. He has been a welcoming mentor to new lodge owners and has been an ardent supporter and advocate for the local business community. “Everything he has contributed has been done selflessly and always with an eye for making our community better. I can’t think of a better more deserving recipient for the inaugural award”, said Friedman.

The Mad River Valley Chamber of Commerce is dedicated to improving  the economic well-being of Mad River Valley businesses, through leading destination marketing, building brand equity, and creating a unified and engaged. 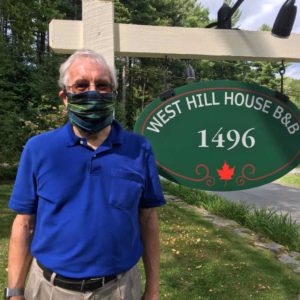