Last week, the Vermont Agency of Transportation (AOT) announced the second round of 2014 projects planned for Vermont roadways, including more construction projects in the Mad River Valley. 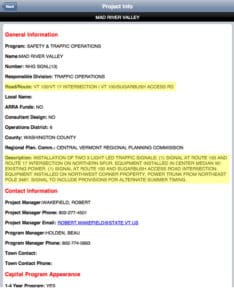 First on the list are finishing touches on 2013’s route 100 road rebuild including the connection points to the new Kingsbury Bridge. The Kingsbury Bridge staging site will be cleaned up and evacuated and there are also a few minor sign projects and 3 culvert replacements. The real surprise is near the bottom of the list of projects: “Safety improvement project: Installation of two 3 light LED traffic signals.”

When questioned, the Warren and Waitsfield Town Administrators had not heard of the plans. Both were planning on contacting the AOT program managers to find out the details of this summer’s construction schedule in the Mad River Valley.

Vermont AOT project manager Robert Wakefield explained that the primary reason for upgrading to traffic signals is public safety, with a secondary benefit being improved timing, especially during the winter ski rush weekend times around 8a and 4:30p. “The holiday traffic, especially fall foliage ‘peeper’ drivers, will be drastically improved with these signals. They are better for everyone and we are working with town officials to ensure the construction disrupts daily life as little as possible.”

When asked about what he thought, a Fayston resident exclaimed, “There are days in July where I have sat waiting to turn left onto Route 100 for over 5 minutes – especially in the summer when the deck at the Den is busy. I only have 30 minutes for lunch. If I want a sandwich from Mehuron’s, I basically have to speed there and back, then scarf down my lunch to make it back to work on time.”

Wakefield claims that controlling traffic with modern signalling technology at the 2 busiest intersections in the Valley will not negatively affect residents on most days and will improve wait times drastically during holiday weekends. “This is just the next traffic evolution for the valley. I understand change is hard for people, especially in the Mad River Valley, but it was inevitable. Increased traffic causes safety problems. Signalling fixes those problems.”

When prompted about specifics of what these stop lights might look like, he offered real-world designs that were part of the project development this winter. 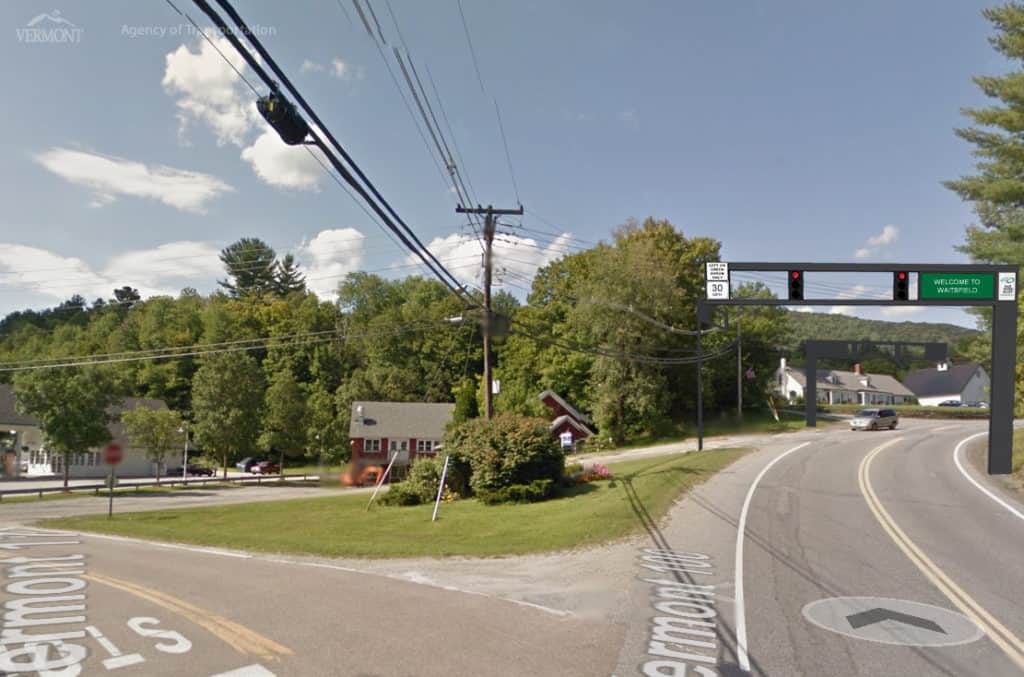 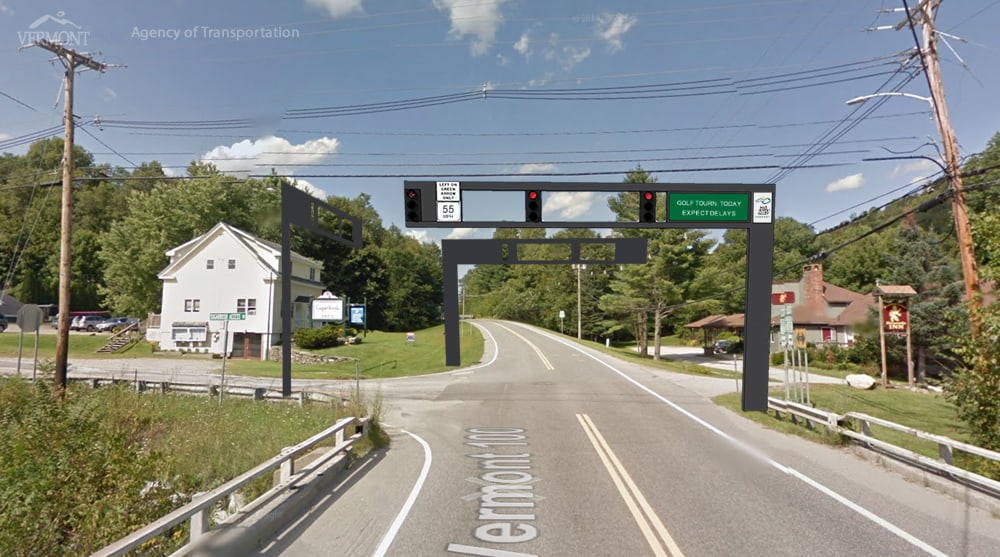 Without any documented pubilc input, the AOT has slated these two projects to happen concurrently this summer starting in early May.

While officials responsible for the central Vermont portion of AOT planning 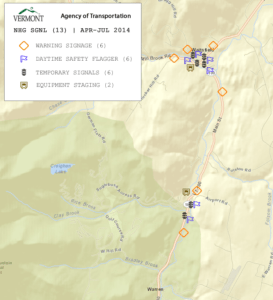 would not comment, one insider told us that the expectation is that Route 100 will be manned by up to 6 safety flaggers during daytime hours, then smart temporary signals will control traffic nightly from 7p – 7a.

“For most of May and part of June, there will be minor wait times on route 100 at both route 17 and the Sugarbush Access Road. It won’t be nearly as long as what you experienced with the highway rebuild last summer though,” offered Wakefield.

Traffic Signal Program Manager Arnie Metzger was quick to point out that even though installation of the new signals are a high priority, the AOT and contractor will keep the special nature of the valley in mind from start to finish. He points to the new breed of temporary signals being used during construction and their advanced features: 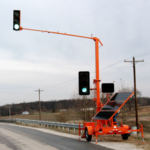 Using the same safety ordinance clause that allowed the AOT to require Sugarbush Resort hire traffic police on winter weekends in the late 1990’s, the AOT is exercising the state’s right to fast track projects deemed ‘crucial to public safety’ through the planning process without local approval. There is no funding required of the towns of Warren and Waitsfield, but the state has said the contractor may ask for town road crew support during especially busy holidays like the 4th of July.

The planned lighting systems are actually controlled by smart technology that allows each town to control content on the billboard portion of the sign. Much like in larger cities, events that could cause traffic problems like powder days, moose crossing season or even leaf peepers driving well below the speed limit could be displayed in the Internet-connected green displays on the elbows of the signal structures. When asked whether this conflicted with local signage ordinances, Metzger was quick to point out that safety on state highways supercedes any local ordinaces. “If we needed to put a billboard up to make the public safe, we could.” 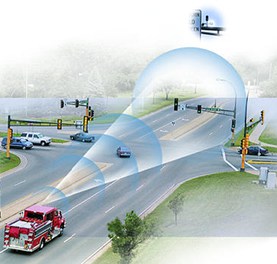 will be given rechargeable powered beacons that mount in their vehicles and automatically switch the lights to a blinking green, allowing them uninterrupted flow through intersections.

When pushed for a reason as to why the project was being ‘fast-tracked’, the AOT’s Policy, Planning and Intermodal Development director Michael Adler commented “This is a public safety issue. You have your new road. Projections show your traffic is increasing and accidents, especially at these intersections, are only going to get worse.” When pushed for a more concrete reason, his only response was “why is it that you think the Mad River Valley is exempt from the rules followed by the rest of us?”

Lisa Davis, the chamber’s frosh marketing coordinator offered – “I think we just had the perfect storm: the new smart speed limit signs, coupled with the launch of our film project and the early, and consistent snow has caused this steady increase of traffic on our roads. Marketing works and when the weather and economy are consistently improving, what can you do?”

Central Vermont Regional Planning Commission chair, Seth Abrahms, declined to give his opinion on the project, saying only “It’s not like we haven’t warned everyone in the Vallley: if you don’t all get together and work as one entity instead of 4 or 5 individual towns, we are bound to have unintended consequences. Public Safety is public safety.”

One long-time Mad River Valley resident who wished to remain anonymous may have said it best: “The state’s always butting into our business. Why can’t they just stay over there and leave us alone? Are we ever going to have a summer without messy construction?”